At a full cabinet meeting on Tuesday 15 December, councillors heard new statistics depicting a poor state of the town’s secondary school rolls, with the historical Penicuik High School now standing at just above 60%. Its contemporary in the north of Penicuik is somewhat higher at 81%. These rolls are forecast to fall considerably due to the ageing population and delays in building new homes within the catchment zones. 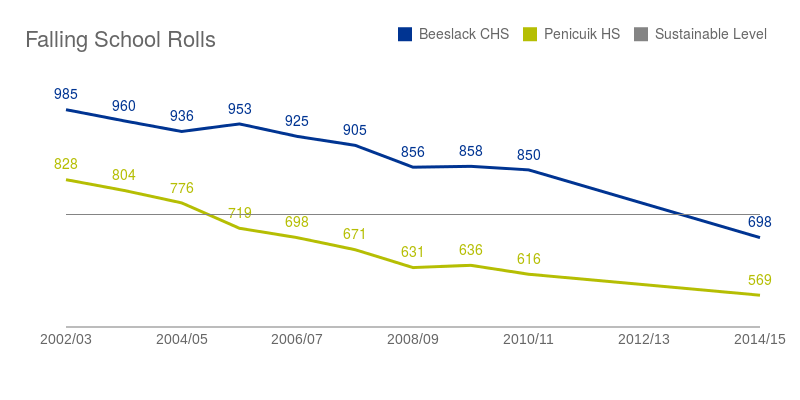 New guidance from the council states that a successfully high school will have at least 750 pupils but neither Beeslack or Penicuik High are believed to have the ability to reach this target again without an unlikely major spur on housebuilding.

The council has been aware of the falling rolls since 2011 when they launched a public consultation aimed at merging the two secondary schools whilst retaining the split campus. Due to strong opposition this proposition was refused and the institutions have since hung in the balance whilst awaiting a future decision.

Last year, the go ahead was given to initiate new feasibility studies aimed at relocating a secondary school into the vicinity of Loanhead, Roslin and Bilson and creating a new single site school for Penicuik. The studies are still on going but the report put to councillors suggested developing a “Centres of Excellence” model with links to Edinburgh University; it put emphasis on creating a new school with a scientific focus:

It is not known what this model would mean for catchment zones and whether students would choose a secondary school based on their chosen field of study.

Midlothian Council are due to commence informal consultation with affected parties in the new year before a formal consultation is held. The public will be able to have their say before the end of the school year in June; an exact consultation timetable has not yet been produced.

Unlike the previous proposals for a merger, it is believed that this new round of discussions will focus on building two new schools through the Scottish Government Schools for the Future programme. The identified sites will be included in the consultation but currently they are believed to be the land at Beeslack CHS or land at Penicuik Public Park for the new Penicuik High School and Easter Bush Science Park, land at Roslin or Bilston for a new A701 Corridor school. Sandra Banks from Midlothian Council’s Education team said:

The Council has not yet identified a preferred site for the option of a secondary school in the A701 Corridor.  The consultation in 2016 will put forward all potential sites identified to date and provide the opportunity for participants in the consultation to give their views and to put forward other options.

Beeslack Community High School has recently received roof upgrades to stop water ingress but it remains in a poor state with a rating of B on the council’s integrity scale. The older, but of greater Architectural significance, Penicuik High School is worse with a C rating. There is strong public opposition to altering the old southern facade and portion of Penicuik High School, though the council could feasibly demolish and alter the northern 1960’s extension.

Should plans progress to timescale, the High school could be replaced by 2019 but a new A701 Corridor secondary school would have to wait until a later round of funding and may not be delivered until 2025. Pupils would continue to attend Beeslack.