A year after contractors fenced off land north of Greenlaw Mains, Taylor Wimpey has confirmed that they won’t be returning anytime soon.

The housing developer, who is seeking to build 458 dwellings on allocated land north of Greenlaw Mains One, faces further delays due to ongoing difficulties in signing a section 75 legal agreement with Midlothian Council.

The forthcoming section 75 legal agreement must be signed by both parties, Taylor Wimpey and Midlothian Council, before work can begin onsite. Taylor Wimpey’s monetary contributions to the local infrastructure and education sector will be decided upon along with the provision of social dwellings. The latter is believed to be one of the sticking points. Information on TW’s own website tells us that they will give around £2.7m to the council to build new classrooms at Mauricewood Primary, along with make improvements to Beeslack CHS. They will also give £1.2m to erect a new roundabout at the A702/Mauricewood Road junction. Whilst contributions to the local economy would usually be included in the document, it is believed they will be minimal due to the developer’s wish to provide a commercial zone onsite.

We continue to be fully committed to our development at Greenlaw Mill in Penicuik, and our discussions with Midlothian Council in order to agree our Section 75 obligations are nearing a conclusion.

We appreciate the local community is keen to have an update and to see some activity on the site, and we will of course provide a full update as soon as we can.

When concluded, our Section 75 agreement will secure our full planning permission, and we can assure the local community that work will start as soon as possible thereafter in order to deliver a fantastic range of new homes.

In an email sent to a resident neighbouring the perimeter fencing, Midlothian Council stated that they hope to sign this agreement in July or August, however they previously told us June, showing the uncertainty that hangs around the delivery of this crucial housing development:

The Council and developers Taylor Wimpey have been engaged in intense and complex negotiations regarding the planning agreement in relation to the development of  458 houses at Greenlaw Mains, which impacts on the provision  amongst other requirements of road infrastructure within the wider Mauricewood area.

These negotiations are expected to reach a concluded legal stage within the next few weeks. There remains technical information which is to be provided and  concluded, and whilst all parties are working together to conclude these matters  the processes involved  may impact on the date on which a legal document is signed.  Current expectations provided there are no last minute issues is that the agreement will be concluded sometime in July /August 2014

Midlothian Council were unavailable to comment on the status of Greenlaw Mill.

Residents were concerned last weekend after it appeared that a section of fencing had been removed, prompting calls that the developer may be pulling out. Taylor Wimpey however have elaborated on the matter pointing to vandalism as the cause:

We can confirm that a small area of fencing on the perimeter of the development had been vandalized, however this has been replaced as part of our ongoing and regular maintenance checks of the area. This regular monitoring will continue throughout the summer holidays and local residents should be reassured that health and safety remains our highest priority. Children should be reminded not to play near the development site.

The developer is keen to stress that the site is dangerous due to some exploratory works which were carried out as part of the planning process. Six metre deep bore holes exist in places, whilst a mine shaft has been uncovered in the north west of the site. The positioning of the development will prove difficult when construction workers come to start work. Grouting will be required in phase two of the development due to instability from previous mine workings whilst gas protection measures will also be required in a number of areas due to high Carbon Dioxide, Methane and Radon levels, as the graphic shows below: 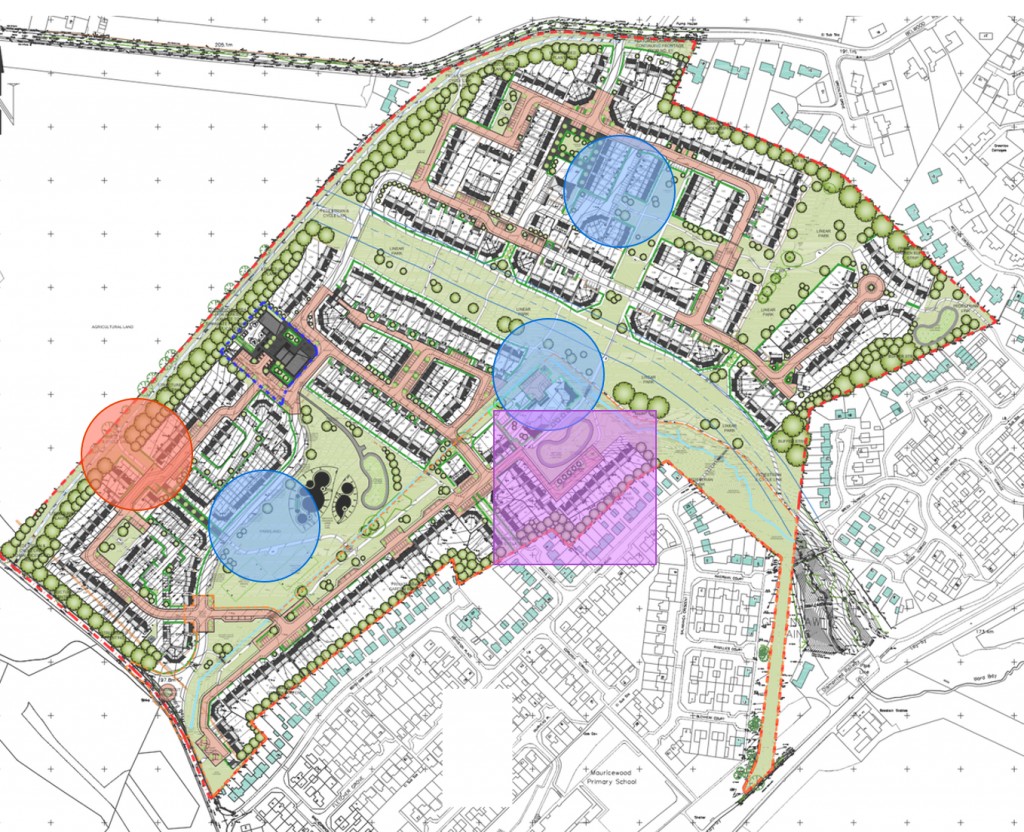 The lack of an underfloor membrane, which stops the gases entering the property, has led to the evacuation of several dwellings in Newbyres Crescent in Gorebridge due to high CO2 levels. Whilst humans exhale CO2, high concentrations of the gas can be toxic and even fatal. Methane gas can also cause difficulties breathing. Radon gas is radioactive and in some medical studies it has been linked to cancer.

Stay up to date with this housing development and others in Penicuik by joining us Facebook or Twitter. Tell us your views below in the comment box or email us at Hello@PenicuikCuckoo.co.uk.