Four years after submitting their original planning application, Taylor Wimpey has finally received formal permission to erect hundreds of dwellings in the north west of Penicuik.

Whilst planning approval was received in February 2013, it has taken until now to come to an amicable agreement on developer’s contributions to the local infrastructure, economy and affordable housing supply.

Under the agreement, Wimpey will commit £7m to the community, including funding a £4.3m upgrade of the Mauricewood Road/A702 T-junction creating a roundabout that will be able to withstand the increased volumes of traffic from both ‘Greenlaw Mill’ and any other new housing developments. Also as part of the package will be the contribution of funds to education and the wider community along with further enhancements to Mauricewood Road; signalisation of the A701 junction and formation of a new footpath to connect the A702 and A701.

We are very pleased to confirm that planning permission has been granted for our land at Greenlaw Mill in Penicuik. This development marks our ongoing commitment, investment and strong track record of delivering excellent quality developments in the Midlothian area.

As well as an impressive range of new homes, our development will provide a range of economic benefits for the local Penicuik area which includes supporting around 120-160 jobs per year of construction, as well as the attraction of new customers to local businesses.

Greenlaw Mill will contain 422 homes and 36 apartments upon completion. Twenty-three of these will be affordable. Fourteen styles of home across two, three, four and five bedroom homes will offer a variety of options for new house buyers ranging from terraced to a detached villa with a double garage. Affordable housing will be either one or two bedroomed.

A large “linear park” will split the development into two, though a road will run between the halves. In addition to this, greenspace will be landscaped to offer walking routes and provide areas for recreation with a large play park and football pitches planned. A bus route is forecast to serve the site and a new small commercial zone is planned for the centre, though this is subject to a later application. 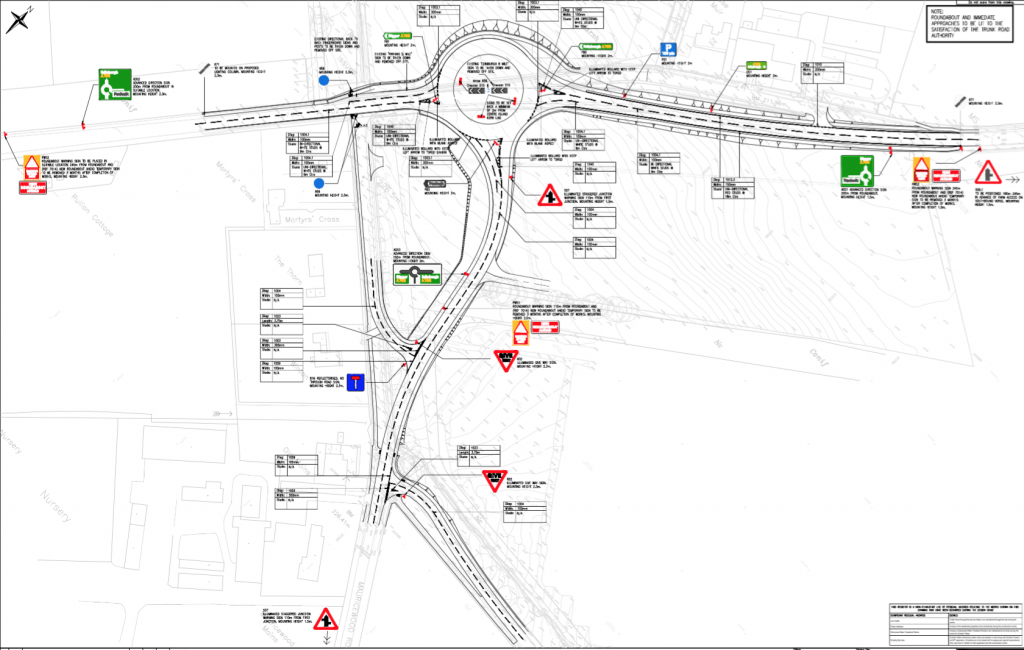 However, before work can commence, works must be undertaken offsite to divert water mains that are running beneath the planned route of the newly realigned and Mauricewood Road and roundabout onto the A702. Scottish Water will undertake the roadworks from mid to late February through to July.

A spokesman for Scottish Water added:

A developer is planning to build a roundabout to serve new housing development in the area. In order to facilitate the development, and before this can take place, Scottish Water is required to carry out some work to lower water pipes with a diversion at the location.

While much of the work will take place away from the road, it will be necessary to carry out some work at the junction of the A702 with Mauricewood Road. As a result some traffic management is required. Disruption will be kept to a minimum by carrying out the work in three stages – likely to last around a week each – between late February and the summer. The first stage will allow for the installation of temporary crash barriers, the second stage comprises of the laying a new pipe and the third stage involves the removal of the crash barriers. We will endeavour to carry out each phase of the work in order to facilitate this development as quickly as possible.

We are grateful to customers and motorists for their patience and understanding during this work which Scottish Water is required to carry out to facilitate planned development in the area.

Wimpey are required by planning condition to have constructed the new A702 roundabout and signalised the A701 junction before the first house can be occupied, however preparatory construction work may commence onsite before these are complete. It is believed that the A702 roundabout will be operational before the year’s end, though the exact dates of construction and timescales are still forthcoming.

Seven phases of work will be undertaken once construction commences. The first will be to the rear of Boyd-Orr Drive, where a new row of houses will be erected along with the apartment block. This phase (and the sales cabin and show home) will initially be accessed using a t-junction on Mauricewood Road. A roundabout will replace this once phase two gets underway.

Taylor Wimpey added that they will update the community in the next few months, though prospective buyers can sign up for updates on their website.

It is a process usually concluded within the year but for Taylor Wimpey their battle to receive approval for their new Greenlaw Mill development has been fraught with delays and legal wrangling, pushing construction back from August 2013 to Summer 2016.

When Taylor Wimpey was formed from the merger of housing giants George Wimpey and Taylor Woodrow  in 2007, they inherited 75 acres of land in the north of Penicuik which had been allocated to housing in the 2003 Midlothian Local Development Plan. It had been the intention for the new developer to carry on the legacy of George Wimpey and realise their plans for the site but when the markets crashed and housing bubble burst, the new ‘Greenlaw Mills’ neighbourhood was shelved, only to be unearthed again in 2011.

Three planning applications followed in 2011 and 2012 to update the original scheme, each one superseding its prior and subsequently reducing the number of planned dwellings from just over 500 to 458. The site had long been adorned with a “coming soon” sign, teasing its future, so the applications were far from surprising.

After a phase of statutory consultation and consideration, Midlothian Council jubilantly announced on 26 February 2013 that Taylor Wimpey were now proud recipients of planning approval for the development. Little did they know that the associated section 75 legal discussions would take just shy of three years to complete, halting any progress on construction.

Though, full of eagerness to get building, in August 2013 the house builder’s contractors arrived on site, JCBs primed and ready to begin preparatory works. In two days the previously fielded land had been overturned, a secure fence erected and power line diverted. Residents looked on as the long muted plans became a reality. However in lieu of the necessary legal agreements the developer was not permitted to undertake the works and the flurry of activity ceased.

Now in 2016, a sole shipping container within the perimeter fencing serves as a reminder of those optimistic days when Penicuik’s new housing expansion was set to get underway. Grass, weed and wildflowers have replaced the heavy machinery upon the undulations of upturned earth that were formed during the early works. The occasional dog walker strays into the land that was fenced off despite the evident lack of construction work.

During the legal discussion years, news of progress was few and far between. Press release after press release spoke of the end being in sight but it didn’t materialise. We don’t know what caused this delay and likely never will but Midlothian Council noted in their new Local Development Plan draft that they had been frustrated by the delays, probably no more so than Wimpey who have managed to erect an entire housing development at Bilston in the time period and commenced a second at Loanhead.

However on Christmas Eve 2015, the saga finally came to an end with both parties agreeing on the contributions the council and the local economy and infrastructure will receive from Wimpey.

This really isn’t the end; it is the beginning. The final approval of this application will open the doors to the next housing application and then the following. Indeed, we will only have to wait one month to get a glimpse of Cala and Avant Homes’ plans for the land north of Rullion Road. If you thought Greenlaw Mills is going to be a large addition to the town, then you better be prepared for the 500-800 homes planned by the upmarket developer.

Penicuik’s expansion is about to truly get underway. For the town that means fifteen years of construction which will end up in a significantly larger population, perhaps considerably over 20000.

Several questions remain: Will our infrastructure cope? Can the school system adapt to the falling rolls, yet maintain a preparedness for the future? What will our community look like; will we continue the slide into being a suburb and commuter town associated with Greater Edinburgh or can the new developments aid the towns economy, bringing in new retail and leisure developments? I think I know the answer to these and I can’t say I’m optimistic but with this second property boom, not seen in Penicuik since the 1960s, we have a chance to not follow in the footsteps of those who failed before us. Let’s hope any new route isn’t a mere diversion to the same destination because I’m not sure any of us will be happy with where we would end up.

Take a trip through the past four years of Taylor Wimpey news with out tag archive here.