There is no denying that Penicuik’s town centre is dying, so it is time to assign a do not resuscitate order and place the remains six feet under, writes The Penicuik Cuckoo Editor.

With another two units putting up their to let signs, I will take a look at the options the ailing town centre now has.

It is clear that Midlothian Council’s focus is placed firmly on expanding the out of town retail park that is the Peel Pentland Centre, so there now needs to be a monumental shift in the uses of commercial units in the town centre. To say that such a shift is not already ongoing would be naive. It is ongoing but it is travelling in the wrong direction. Landlords are desperately scrambling to find tenants who need to accept high rental rates with lacklustre returns. They believe this is only possible by changing their retail unit to one which will serve hot food intended to be eaten out-with the premises. They couldn’t be more wrong. The market is clearly over saturated, even a council conducted licensed premises consultation showed this. Local landlords and developers need to start thinking outside the box and to help them do this I’ve compiled a summary of two of the contentious options which need to be debated: facade improvements or complete rejuvenation and regeneration.

Yes, I know both options are costly and yes I know they are both pie in the sky ideas, but what is the harm in debating the radical; visualising the impossible?

Facade improvements are proving to be a popular option at the moment as a relatively low cost alternative to demolition and rebuilding. Effectively it is the Botox of a middle aged building. Construction workers remove the units’ frontage and replace it with something more appealing. This type of constructive surgery has just been completed at the Peel Pentland Centre and a raft of new signups seems to show its success.

A prime example of where this would benefit the town centre is 40 John Street. Erected in 1976, the original supermarket has gone through being a fashion retailer to emerge as a charity shop. The current lease term is up for renewal in 2019 and in all likelihood it will remain “vacant” until then, if not beyond. Visually, it is a typical mid to late twentieth century build with a pebbledash render and a protruding platform for oversized signage, the equivalent to a fabric awning without the elegance and class. When contrasted with the neighbouring 18th and 19th century cottages, it is frankly an embarrassment. Quite rightly so, it, 40 John Street, and the rest of the surrounding precinct were removed from the Penicuik conservation zone in the last Midlothian Local Development Plan. This removal now allows redevelopment to be undertaken with relative ease in this area.

What could be done then to make this unit, and its surrounding parade of shops, more appealing? A new facade should be considered, one made with high grade materials. The pebbledash should be replaced with bare sandstone like the neighbouring conservation properties, however the design should not be something out of an 19th century housing catalogue. It should acknowledge the history of the town whilst glancing towards the future. I don’t have the architectural know how to describe what this new frontage would look like but developers should think along the lines of bare stone accompanied with minimal framed windows with a smattering of locally sourced wood here and there. Visualise Penicuik House but on a smaller scale with larger ground floor windows. The design of 25 John Street did attempt this with relative success but again the stone chosen was out of character with the conservation properties. Penicuik’s High Street however is a different can of worms. The once beautiful bare stone frontage on the north side of High Street has now been replaced with oversized signage, pebbledash and bathroom tiles at the base of the shop windows. My recommendation? Take it back to the way it was in the 1900’s. (see below) 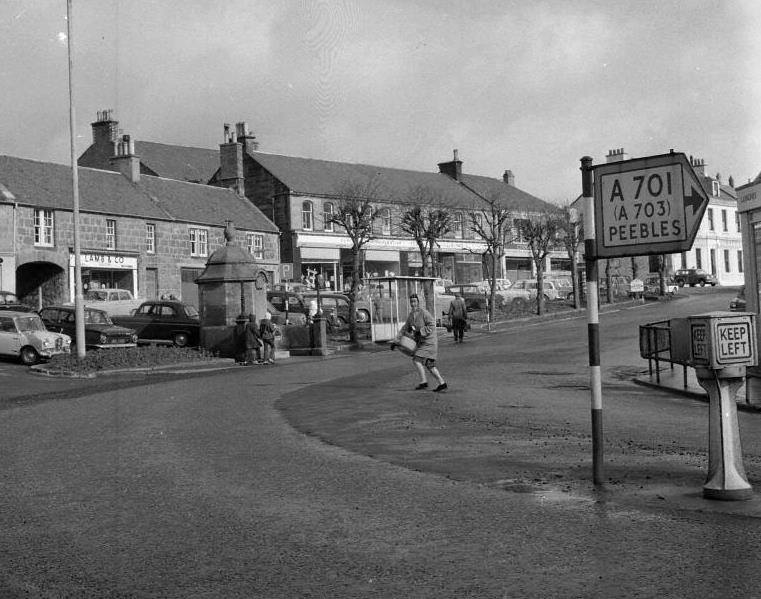 High Street can be seen beyond the A701 © Ye Olde Penicuik

As you can see the visual appeal of this High Street is much greater with three bay shop windows, delicate shop signage and intricate stone work. Best of all? Look at that arch on Lamb’s Pend. If there was only budget to do one thing, it would have to go to reinstating the arch. Strangely however, the South side of High Street has remained relatively untouched with the original facades remaining. The north side should mirror this and it would give way to a unified design to welcome passing commuters, and possible customers.

A facade improvement scheme like this has just finished in Dalkeith. Funding was supplied by various grant giving bodies, along with some developer and landlord contributions, providing a regeneration budget of £3m for around thirty properties. Penicuik does not have that many properties in need of new frontage however tackling the black glass front on B&M Bargains would likely consume a large part of any budget. In theory a scheme would be relatively easy compared to the other option I’m just about to discuss, but Midlothian Council did try to get an improvement scheme off the ground in the early years of the new millennium and the uptake was laughably poor. Businesses need to commit, especially to the upcoming Business Improvement District proposal, if they stand any chance of surviving.

Option two is the radical one and pitching to established residents I don’t expect it to go down well. I propose complete regeneration of the B&M Bargains area including the car park, dental surgery, Farmfoods terrace of shops and the 25 John Street development. It is extreme and would require a developer and several anchor tenants to undertake. What would the basis be for such devastation you ask? Well, if we look at an aerial view of the development, we can see that the land is greatly under utilised. Let’s take a look at how the land could be put to better use: 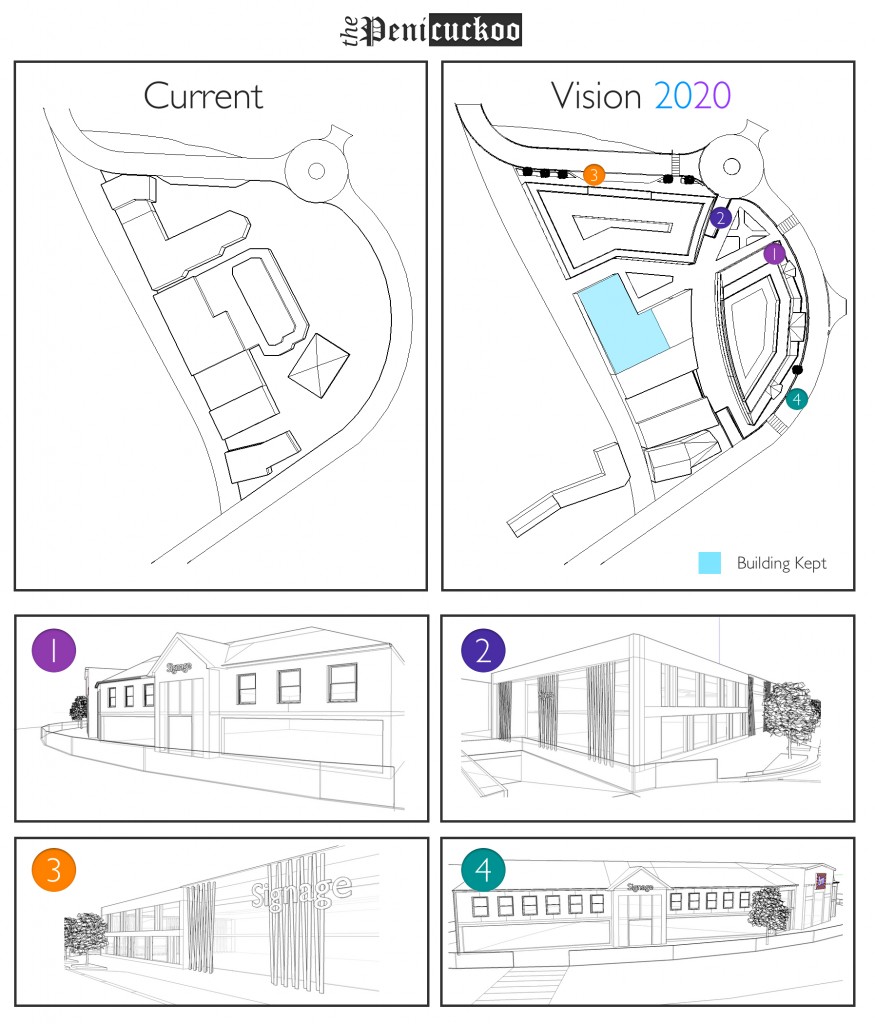 Plans are rudimentary and should not be taken to scale.

As you can see above, the parking has gone, well from the surface anyway. In my plans above, car parking would be underground. This would allow this land to be put to better use. However 250 car parking spaces could be provided underground, approximately double the current amount. On top of this there would be a three storey development of three retail units at ground floor level and two floors of residential dwellings. The Farmfood’s terrace and 25 John Street development would be a mixed use one and could attract a sole anchor tenant or several companies. As with the other parade, the second floor could be residential. Elsewhere the “new” block of flats would be extended to meet a the new retail terrace with an additional retail store or cafe added on the ground floor. The upper two floors would remain residential. Demolition would also await for the TSB terrace, being replaced with a three storey building with residential accommodation on floors two and three whilst three additional units could be added on the ground floor. All in all this gives over 100,000 sq ft of new retail or mixed use space (should retail be the sole use in the three unit development and the flagship development). Breaking it down: 34000 sq ft A1 Retail, 4618 sq ft A3 Retail, 43000 sq ft Mixed Use (Leisure, A1 and A3) and 22100 sq ft Residential. By looking at similar developments of this scale and nature an approximate price tag can be assigned of £20m. Including demolition, foundation works for the car park and facade improvements to the surrounding area this could look more like £25m. This is not a cheap option and I never said it would be but it is a radical vision that would certainly change the town centre, with a larger focus on residential properties and leisure/community use units. Whether it would work? Who knows! But there shouldn’t be a taboo on dreaming.

Do you have a vision for Penicuik’s town centre? Do you agree/disagree with our editor’s view? Tell us below or write a letter to the editor by emailing Hello@PenicuikCuckoo.co.uk.