Residents living along a section of Rullion Road, Penicuik, will be disrupted by five week long resurfacing works.

Midlothian Council will be carrying out major resurfacing roadworks in two phases. First between Ravendean Gardens and Glencross Gardens and second between Ravelsykes Road and Caplaw Way for five weeks starting Monday 23 June and ending around Friday 25 July.

The major bus route, servicing the frequent Lothian service 37, is often plagued by potholes due to the high volume of traffic passing over the tarmac. These sections of Rullion Road are the third and fourth in Midlothian Council’s rolling improvements programme.

Residents living on the stretch have been asked to move their cars, however concerns have been raised as to where they will be located. Whilst some houses on the Ravendean Gardens side (phase 4) have garages, the opposite side do not, and home owners will be faced with a five to ten minute walk to a suitable parking space on one of the neighbouring streets. Residents have also been asked to take their bins out of the roadwork zone to be emptied.

Elderly and disabled occupiers though will benefit from a council funded shuttle service. This service, operated by Penicuik Taxis will pick up residents who are unable to make their way to the nearest bus stop. If the resident is just wanting to travel into Penicuik, they will be transported into the centre for free. If the resident intends to travel onwards into Edinburgh, the taxi can take them to their nearest bus stop on either Bog Road or Cuiken Terrace, also for free. The service operates seven days a week between 7AM and 11PM. You can book a taxi by calling 01968 679600. [Thank you to Dougie for the update]

Due to the closure, Penicuik bound Lothian service 37 will be diverted. A route has now been announced as below: 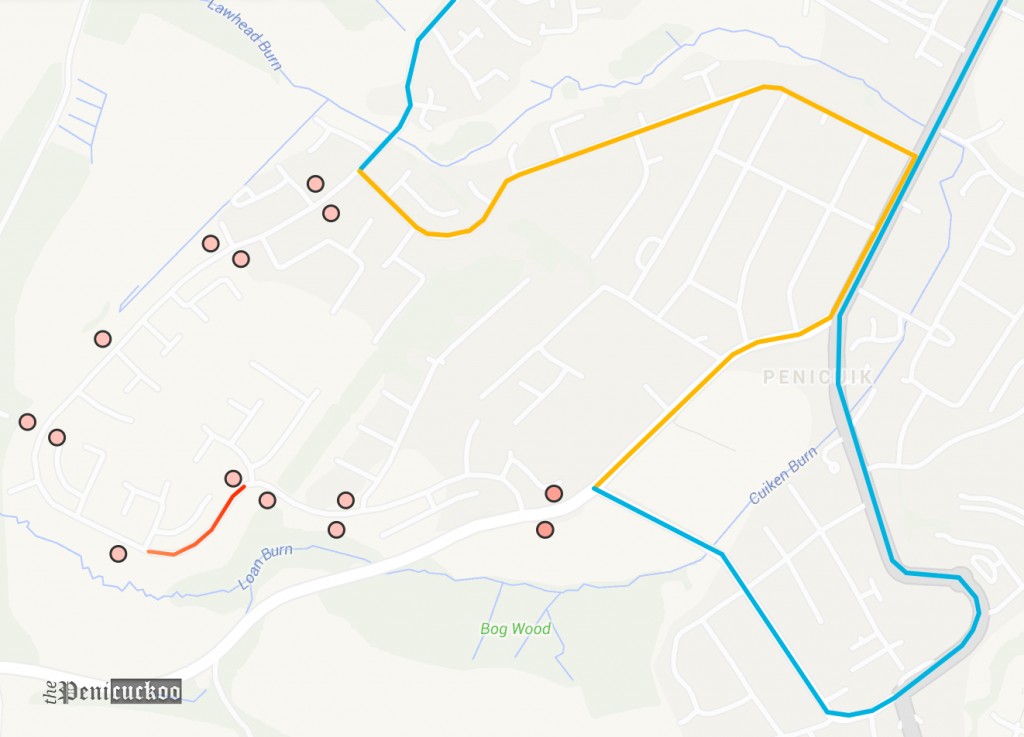 The bus will follow the usual route until it reaches Carlops Road, where it will turn right instead of left. It will then continue along Carlops Road onto Edinburgh Road and turning left onto Cuiken Terrace. Finally it will rejoin the normal route at the top of the road. The temporary bus stops are unknown.

A diversion for other vehicles also follows this route.

Penicuik Prepares to Welcome the Baton